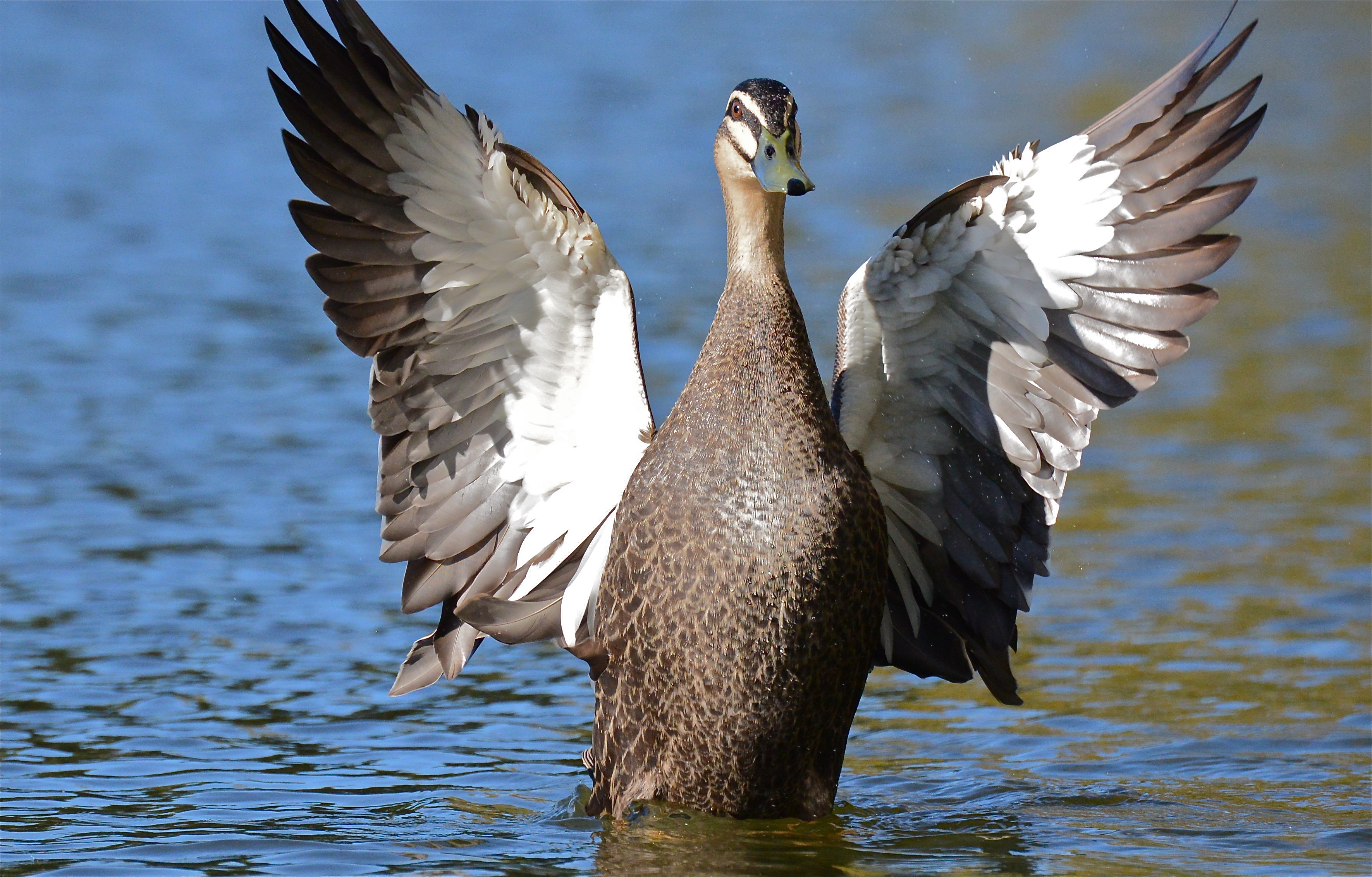 The regulations governing hunting may vary from state to state so you should know the laws of the state or territory in which you are hunting and ensure that you take only those ducks which are legal game.

There are eight species of game duck in Victoria. If a duck season is modified, some game species may not be permitted to be hunted. Be sure to check the season arrangements before hunting game duck.

The game species are:

The Black Duck is a major game species which is common and widely distributed throughout Australia. The Black Duck occurs across a wide range of habitats from deep, permanent, reed-dominated freshwater wetlands to rivers, creeks and brackish or saline wetlands.

The Black Duck is available for recreational hunting in Victoria, South Australia, Tasmania, Queensland and the Northern Territory.

The Black Duck is a dark-brown bird with a pale face and throat. It has a distinctive black eye-stripe that stretches from the top of the bill through the eye. The male and female have a similar appearance.

In flight, the Black Duck is a dark bird with swift wing beats and a slender neck. The upperwing has no white but does have a green glossy colour patch on it. The underwing is white.

On the water, the Black Duck is a medium-sized duck with a slender head and neck which is carried erect.

Here are some images of the Black Duck.

Video footage of the Black Duck can be found here:

*Important note; the Blue-winged Shoveler can not be hunted this duck season*

The Blue-winged Shoveler prefers permanent, well-vegetated wetlands with areas of open water. Habitat may be freshwater or saline. Usually an uncommon duck, the Blue-winged Shoveler is distributed throughout south-eastern and south-western Australia, preferring inland cumbungi swamps and coastal tea-tree swamps.

The Blue-winged Shoveler is a distinctive species with a slender build and a broad, blue-grey bill. The male is more colourful than the female and has a blue-grey head and neck, white face crescent, black back, a white patch on the rump and a deep chestnut-coloured belly. The colouring of the male fades when not in breeding condition. The male has bright yellow to orange legs and feet and is the only native duck to do so. The female is predominantly brown with a light chestnut-coloured belly.

On the water, the Blue-winged Shoveler is a medium-sized duck which floats low, has a distinctive wedge-shaped head and the male has a white patch on its rump

Blue-winged Shovelers are seldom heard but do have a soft chatter when flying.

Here are some images of the Blue-winged Shoveler.

Most common in brackish coastal lagoons, saltwater estuaries and the lower reaches of creeks around the coast, the Chestnut Teal is distributed in south-eastern and south-western Australia. Vagrants may occur elsewhere. Tasmania and southern Victoria are the species' stronghold.

The Chestnut Teal is available for recreational hunting in Victoria, South Australia and Tasmania.

On the water, the Chestnut Teal is a small, dark duck which floats high. The male has a glossy green head and a white flank patch. The female and juvenile male are similar to Grey Teal, but are darker and lack the white throat.

Here are some images of the Chestnut Teal.

A major game species, the Grey Teal is common and widely distributed throughout Australia. Grey Teal can be found across a range of habitat types, from mangrove estuaries of the coast to deep cold lakes of the highlands. It is found in its greatest numbers in the tree-lined billabongs, lagoons and floodwaters of the Murray-Darling River system. The species is highly nomadic and will move in response to local conditions.

The Grey Teal is available for recreational hunting in Victoria, South Australia, Tasmania, Queensland and the Northern Territory.

The Grey Teal is a mottled brown bird which frequently mixes with other species. The Grey Teal is lighter in colour than the Chestnut Teal, particularly around the head and neck. The male and female have a similar appearance.

In flight, the Grey Teal has a wedge-shaped white patch on both the upperwing and underwing. It has a shorter and thicker neck than the Black Duck.

On the water, the Grey Teal is a small duck which floats high. Its general colour above is a dark grey-brown with a large, pale almost white face and throat. The Grey Teal has no eye stripe.

Here are some images of the Grey Teal.

Video footage of the Grey Teal can be seen here: Grey Teal

The Hardhead is widely distributed throughout Australia, however, the stronghold of the species is in the deeper, permanent freshwater swamps and lagoons of the Murray-Darling Basin and south-east South Australia. They are also common in south-west Western Australia.

The Hardhead is available for recreational hunting in Victoria, South Australia, Queensland and the Northern Territory.

A medium-sized, dark-brown bird with white feathers under the tail. The male has a white eye.

In flight, the Hardhead has a large white band across the belly, the underwing is translucent white and the upperwing has a white strip on the trailing edge. The Hardhead is very swift in flight with rapid, short wing beats. The wings are narrow and pointed and set well back on the body.

On the water, the Hardhead is a dark coloured duck, floating very low and sometimes the white undertail is visible.

Normally silent, but the male has a soft, wheezy whistle and the female a soft, harsh croak.

Here are some images of the Hardhead.

Video footage of the Hardhead can be seen here: Hardhead

Mountain Duck are distributed throughout south-eastern and south-western Australia and inhabit lowland wetlands, both freshwater and saline, which are near pastures or arable land. Being grazers, they feed in pastures, cultivated crops and shallow water.

The Mountain Duck is available for recreational hunting in Victoria, Tasmania and South Australia.

In flight, the Mountain Duck has large, prominent white wing patches on the shoulders of the wing, a dark body, white underwings, chestnut-coloured breast and a white neck ring.

On the water or land, a large duck with a dark head, white neck ring, yellow-brown or chestnut-coloured breast.

The female and young birds have a white ring around the eye and a white face patch.

The Mountain Duck is a very vocal bird, especially in flight. The male has a low-pitched honk and the female has a high-pitched honk.

Here are some images of the Mountain Duck.

The Pink-eared Duck is available for recreational hunting in Victoria, South Australia and the Northern Territory.

In flight, the head is held high with the heavy bill angled downward. The species has a light underbody, white trailing edges on upperwing and tail and a white crescent on the rump. The wings are rounded.

On the water, a small, light-coloured duck floating high with zebra stripes on body, a large bill and distinctive forehead.

The male and female have a similar appearance.

Here are some images of the Pink-eared Duck.

The Wood Duck is widely distributed and is common throughout Australia. However, it is rare and considered to be a vagrant in tropical Australia. The Wood Duck prefers lightly timbered country near water, be it swamps, dams, rivers or other waterways, where there is short grass or herbage beneath the trees. It is seldom found in dense or extensive swamps and avoids brackish or saline water.

The Wood Duck is available for recreational hunting in Victoria, South Australia, Tasmania and the Northern Territory.

The Wood Duck is a medium-sized goose-like duck with long legs, extended neck, short head and is related to the pygmy-geese of tropical Australia.

On the water or on land, the Wood Duck is a medium-sized, light-coloured duck with a dark head, a characteristic high-tailed posture on water and erect posture on land.

Drawn-out nasal mew. Shorter and higher pitched in the male than the female.

Here are some images of the Wood Duck.