The GMA commissioned research into the level of hunters’ knowledge to find out how much Game Licence holders know about game hunting in Victoria, including hunting laws, firearms safety and good hunting practice.

The GMA engaged Australian Survey Research (ASR) to conduct the research in late-2019 and early-2020.

Australian Survey Research reported on the findings and the GMA has compiled the results into a summary report.

In 2019, the Australian Department of Health released the Economic and social impacts of recreational hunting and shooting report.

The study measured expenditure on game and pest hunting by Victorian game licence holders using a survey, and was conducted by RM Consulting Group with EconSearch and DBM Consultants.

A review of eleven years of data on recreational hunters’ harvest of Victoria’s game species (deer, duck and quail) has identified important trends in hunter activity and wildlife harvest.

This research analysed responses from thousands of deer, duck and stubble quail Harvest Survey Questionnaires undertaken between 2009 and 2017. The respondents’ answers were analysed to estimate measures of hunter success, activity and efficiency.

Results showed that the annual deer harvest (for all species) has increased exponentially, at an average annual rate of 17 percent. Likewise, the number of deer hunters has also increased by approximately 8 percent annually. Data also suggests there has been an increase in hunter efficiency, thought to be mainly attributable to the increasing number (and availability) of deer and increased access to hunting on both public and private land.

In contrast, duck and stubble quail hunter numbers remained relatively unchanged with no evidence of consistent change to total harvests over time. Hunter activity however, decreased by approximately 10 percent over the study period although for active duck hunters, the size of harvest (in line with daily bag limits) has remained unchanged. There was some evidence that in La Niña seasons, harvest per active duck hunter and hunter efficiency increased, probably related to greater numbers of ducks and suitable wetlands available for hunting. The annual stubble quail harvest exhibited ‘boom-and-bust’ dynamics, with an exceptionally large harvest immediately after a La Niña season.

This research demonstrates the importance of combining long-term harvest trends with abundance monitoring to assist in maintaining sustainable bag limits and predicting harvest numbers for game animals in Victoria.

See the full study: Bayesian modelling reveals differences in long-term trends in the harvest of native and introduced species by recreational hunters in Australia 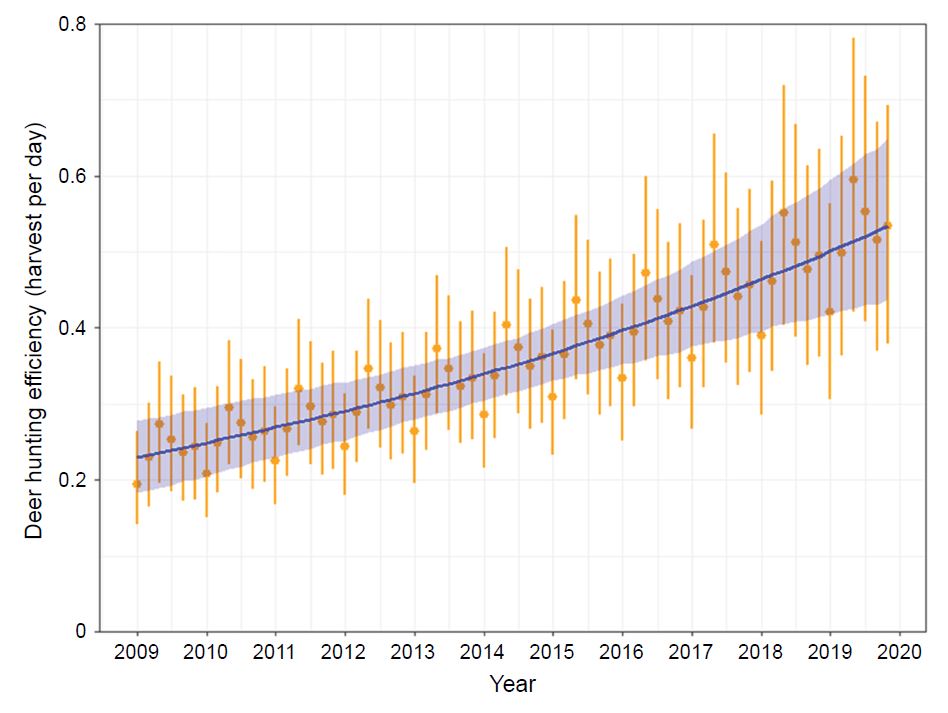