In normal years, eight species of native duck may be hunted in Victoria. These species are listed below.

The Blue-winged Shoveler is a distinctive species with a slender build and a broad, blue-grey bill. The male is more colourful than the female and has a blue-grey head and neck, white face crescent, black back, a white patch on the rump and a deep chestnut-coloured belly. The colouring of the male fades when not in breeding condition. The male has bright yellow to orange legs and feet and is the only native duck to do so. The female is predominantly brown with a light chestnut-coloured belly. The Grey Teal is a mottled brown bird which frequently mixes with other species. The Grey Teal is lighter in colour than the Chestnut Teal, particularly around the head and neck. The male and female have a similar appearance.

On the water, the Grey Teal is a small duck which floats high. Its general colour above is a dark grey-brown with a pale almost white face and throat. The Grey Teal has no eye stripe.

In flight, the Grey Teal has a wedge-shaped white patch on both the upperwing and underwing. It has a shorter and thicker neck than the Black Duck.

A major game species, the Grey Teal is common and widely distributed throughout Australia. Grey Teal can be found across a range of habitat types, from mangrove estuaries of the coast to deep, cold lakes of the highlands. It is found in its greatest numbers in the tree-lined billabongs, lagoons and floodwaters of the Murray-Darling River system. The species is highly nomadic and will move in response to local conditions.

On the water, the Chestnut Teal is a small, dark duck which floats high. The male has a glossy-green head and a white flank patch. The female and juvenile male are similar to the drab Grey Teal, but are darker and lack the white throat.

Most common in brackish coastal lagoons, saltwater estuaries and the lower reaches of creeks around the coast, the Chestnut Teal is distributed in south-eastern and south-western Australia. Vagrants may occur elsewhere. Tasmania and southern Victoria are the species' stronghold.

A medium-sized, dark-brown bird with white feathers under the tail. The male has a white eye.

In flight, the Hardhead has a large white band across the belly, the underwing is translucent white and the upperwing has a white strip on the trailing edge. The Hardhead is very swift in flight with rapid, short wing beats. The wings are narrow and pointed and set well back on the body.

On the water, the Hardhead is a dark coloured duck, floating very low and sometimes the white undertail is visible.

The Hardhead is widely distributed throughout Australia, however, the stronghold of the species is in the deeper, permanent freshwater swamps and lagoons of the Murray-Darling Basin and south-east South Australia. They are also common in south-west Western Australia.

In flight, the Mountain Duck has large, prominent white wing patches on the shoulders of the wing, a dark body, white underwings, chestnut-coloured breast and a white neck ring.

On the water or land, a large duck with a dark head, white neck ring, yellow-brown or chestnut-coloured breast.

The female and young birds have a white ring around the eye and a white face patch.

Mountain Duck are distributed throughout south-eastern and south-western Australia and inhabit lowland wetlands, both freshwater and saline, which are near pastures or arable land. Being grazers, they feed in pastures, cultivated crops and shallow water. In flight, the head is held high with the heavy bill angled downward. The species has a light underbody, white trailing edges on upperwing and tail and a white crescent on the rump. The wings are rounded.

On the water, a small, light-coloured duck floating high with zebra stripes on body, a large bill and distinctive forehead. The male and female have a similar appearance. 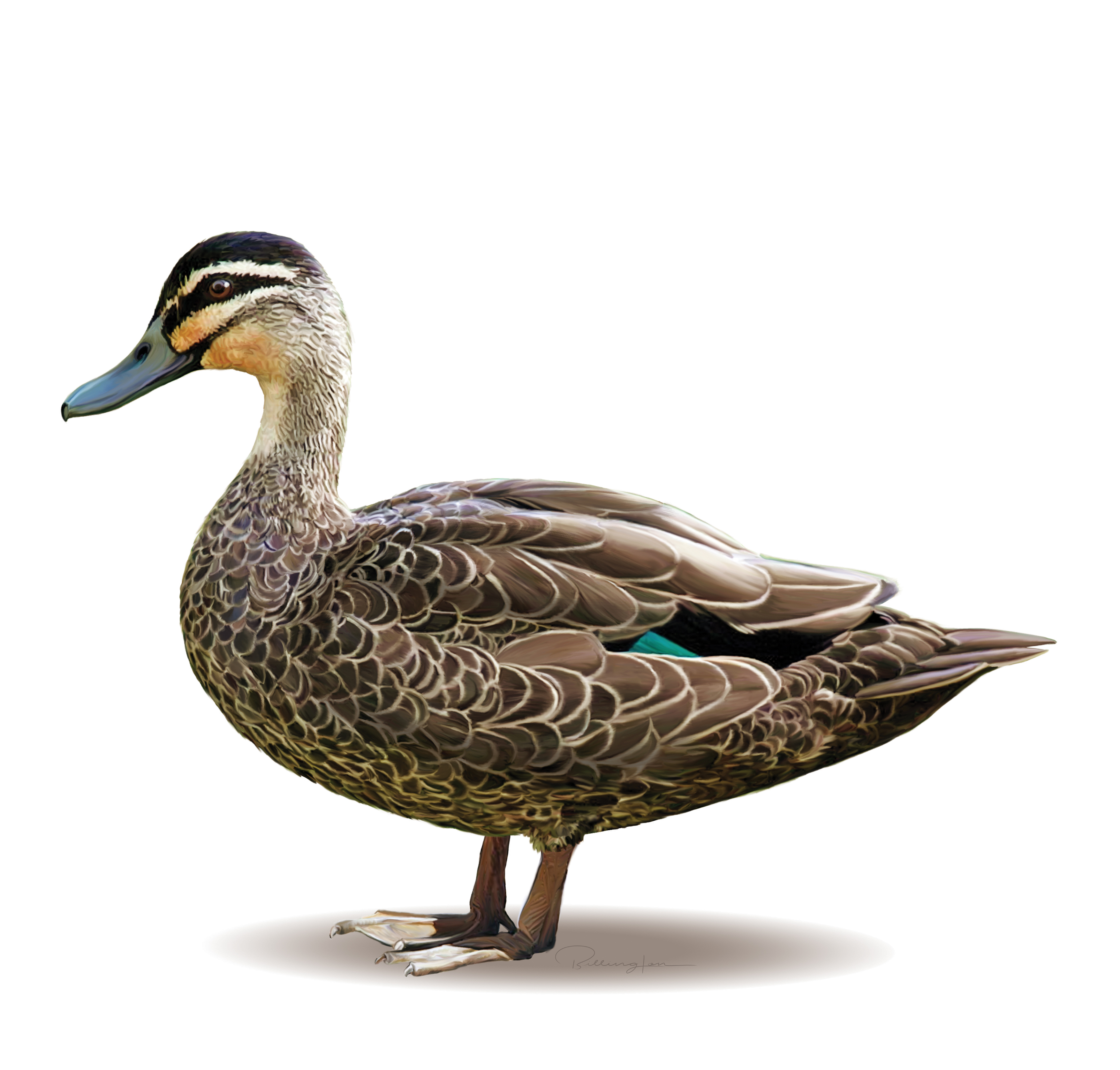 The male and female look similar

The Black Duck is a major game species in Victoria and is a large duck. It is a dark-brown bird with a pale face and throat. It has a distinctive black eye-stripe that stretches from the top of the bill through the eye. The male and female have a similar appearance.

In flight, the Black Duck is a dark bird with swift wing beats and a slender neck. The upperwing has no white but does have a green, glossy colour patch on it. The underwing is white.

The Black Duck is common and widely distributed throughout Australia and across a wide range of habitats, from deep, permanent, reed-dominated freshwater wetlands to rivers, creeks and brackish or saline wetlands. 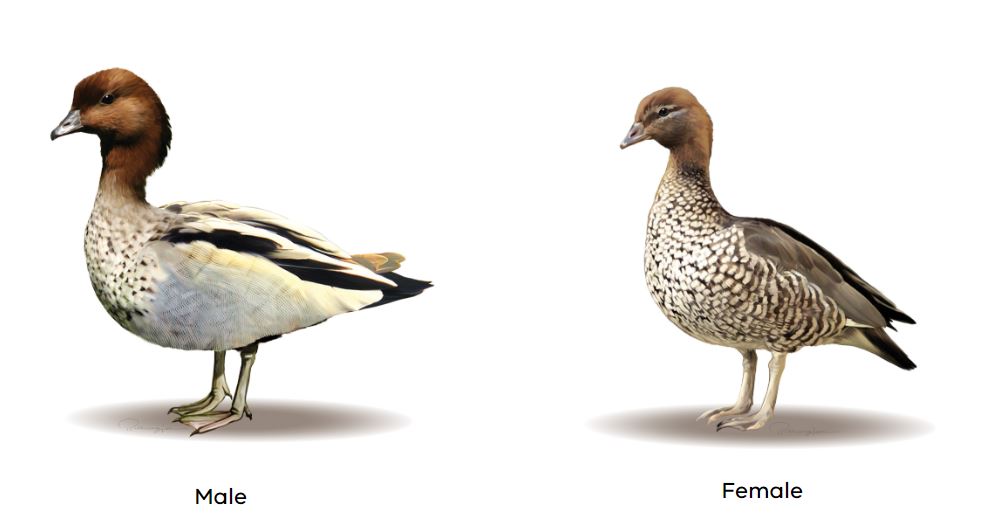 The Wood Duck is a medium-sized goose-like duck with long legs, extended neck, short head and is related to the pygmy-geese of tropical Australia.

On the water or on land, the Wood Duck is a medium-sized, light-coloured duck with a dark head, a characteristic high-tailed posture on water and erect posture on land.

The Wood Duck is widely distributed and is common throughout Australia. However, it is rare and considered to be a vagrant in tropical Australia. Wood Duck prefer lightly timbered country near water, be it swamps, dams, rivers or other waterways, where there is short grass or herbage beneath the trees. It is seldom found in dense or extensive swamps and avoids brackish or saline water.

To be declared game, species are generally common and occur in large numbers. However, just because a species is considered game in one state does not mean it is game in another.

The status of game species may change from time to time and hunters should always check current regulations, season dates and bag limits. Some game species may be protected from hunting at particular times, such as during drought, or bag limits may be changed in response to population numbers and/or environmental conditions.

Prior to applying for Game Licence to hunt game ducks in Victoria hunters need to pass the Waterfowl Identitification Test.

All species of Australian waterfowl are readily identifiable, especially within shotgun range.

Most of our written descriptions of game waterfowl and other common waterbirds are accompanied by illustrations. The illustrations are intended to highlight important distinguishing features and allow for positive identification of the bird, both in flight and in the hand. Important distinctive field marks that allow you to differentiate between each of the species is shown in bold type. The distribution of light and dark plumage is particularly important when identifying waterfowl, especially the presence and position of white areas on the wings and the contrast between underwing, neck and body. Some species have distinctive shapes and voices.

Size may also be helpful in distinguishing between species. For example, the Mountain Duck is a large duck, the Black Duck is a medium-size duck and the Grey Teal is a small duck. This image shows the relative sizes of common waterbirds which are likely to be encountered while hunting.

A distribution map is also included with most descriptions and shows the usual range of each of the species. However, most Australian waterfowl are nomadic and may be found as vagrants outside their usual range. It is important to learn how to identify those waterfowl you are most likely to encounter in the region in which you hunt.

Guide to Australian waterfowl
+ Expand all- Collapse all